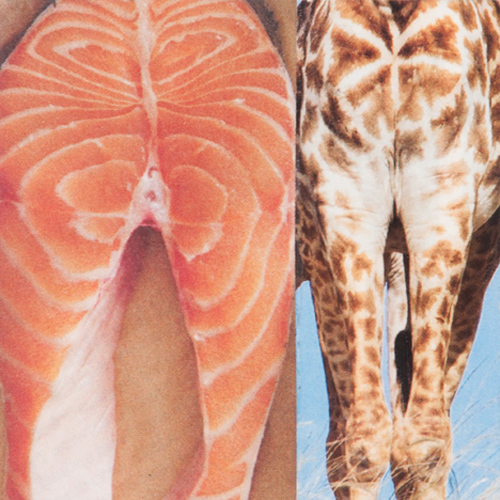 An exercise in concept and creative thinking. Using only found images in print magazines, the idea of connection and completion was explored. The task was to show the relationship in which a person, place, thing, or idea somehow linked or associated with something else. The second example demonstrated the action or process finished by something else.

This challenging task developed rapidly after the serendipitous discovery of a fish fillet in a cooking magazine. The radiating lines of the fillet were reminiscent of a zebra, giraffe, or possibly a tiger; it was simply a matter of finding one of those animals for comparison. In a kids animal magazine was a feature on giraffes, it was that moment that the similarity became uncanny. The idea of completion was found in a couple of science type magazines in which articles about dinosaurs and space provided the fodder for an almost seamless image.

These pieces promote the idea of the inter-connectivity of the world while simultaneously meaning nothing at all. It can be read as a conversation on how species can be wildly different yet oddly similar, a demonstration on how the world is related incredibly close and extremely far, or could simply be a fun design for a pair of hipster leggings.